The Michael & Son Cares Program, which helps families with home repairs they cannot afford, recently met a very inspirational young man named Alvin King. Alvin was born with no arms or legs and reached out to the Cares Program for assistance with a faulty and dangerous hot water heater. After meeting Alvin King and his mother, The Michael & Son Cares Program repaired the water heater, then went above and beyond to make Alvin and his mother’s life a little bit easier. 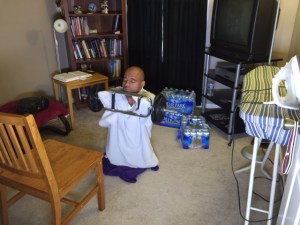 Since the day he was born Alvin King has struggled with adversity. During his mother’s pregnancy, Alvin‘s mother was given a little known drug for nausea with many unknown consequences which were not expressed by her doctor. One rare side effect of the medication was limb loss during the pregnancy term. As as result, Alvin was born with no arms or legs.

Despite the monumental challenges Alvin faces, he always keeps a positive outlook on life and works hard at being as independent as possible. Alvin is able to lift weights, negotiate flights of stairs and even play basketball. One difficulty both Alvin and his mother have been unable to overcome has been transportation. Without a handicapped accessible vehicle, traveling by car is described by Alvin as “painful and dangerous”, causing Alvin to miss physical therapy appointments, family gatherings and most importantly to Alvin, church. 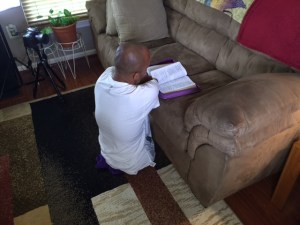 After meeting Alvin King for the first time, Proud Son and owner of Michael & Son Services Basim Mansour decided he would purchase a handicapped accessible van for the King family. “I’ve met a lot of truly amazing people in my life but no one quite like Alvin” said Basim Mansour, Proud Son and Owner of Michael and Son Services. “I found the few hours I spent with Alvin and his mother to be so rewarding, I felt compelled to pay him back” continued Mansour.

Hand in Hand With The Community