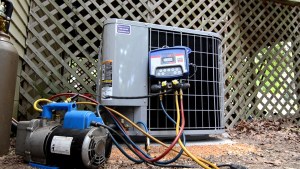 If you have been following Helping Hands for any amount of time, you’ve probably noticed a pattern between health and the indoor air quality. For someone who suffers with a chronic illness, extreme temperatures are not just a matter of comfort, sometimes they can be a matter of life and death. It’s so crucial, in some households, the HVAC unit doubles as a life support system. For Caleb Loudermilk, it was a matter of life and death. Caleb was born with Lennox Gastaut Syndrome, a rare and severe form of epilepsy that left Caleb with the cognitive abilities of a 9 month old child. Suffering from up 100 seizures a day, caring for him was a full time job and left his mother, Amber Burton, unable to work.

When the families A/C system broke down in the dead of a brutal southern Virginia summer, Caleb’s symptoms increased dramatically and he was hospitalized under intensive care for over a month. Because he could not be discharged from the hospital to a home without working A/C, Amber was desperate to have the unit repaired but could not afford the cost. She began to reach out for help and was told about the Michael and Son Cares Program. Shortly after contacting Michael & Son, Caleb’s home had a brand new HVAC system and he was able to return home.

For all of us at Michael & Son who have worked with the Helping Hands Program, December 23rd is solemn day. Three years ago on that day, in the midst of all the holiday cheer, we lost someone who had a profound effect on all of us. Amanda Mahmood was a young, bright and inspirational young lady who suffered from congestive heart failure. We helped her with some home repairs and in return she inspired us to help more families and make a bigger impact.

Three years later, and just a week after that anniversary of Amanda’s passing, a call comes across my desk from a single mother of a disabled child in Richmond, VA with a broken HVAC unit. Recently widowed Cari Browne and her daughter Savannah had been in the cold since Christmas morning and because Cari was providing 24 hour care for her daughter, she was unable to work and definitely couldn’t afford the cost of replacing her homes HVAC unit.

Her daughter, Savannah, was born with a rare gene mutation that caused her to have heart failure as well. The cold temperature in her home was aggravating her condition and they were in desperate need of help. When I spoke with Cari and we talked about Savannah’s condition, I immediately thought of Amanda. It gave the request even more of a sense of urgency and I called Michael & Son CEO, Basim Mansour, who was traveling but gave the green light to have the work done immediately. Within just two days of contacting Michael & Son Services, we were at the Browne’s home installing a brand new HVAC system at no cost. Check out the news story for more details about the job.

And Then There Was Heat!