Anyone with a Facebook account remembers the “ice bucket challenge”, you may have participated yourself. Basically, it involved someone making a video of having a bucket of ice water dumped over there head and then challenging a friend to do the same. The whole point was to spread awareness about ALS but the sad fact is many people didn’t really understand why they were doing it or what ALS actually is. Another important point missed during the entire challenge was the fund raising aspect; most people just wanted to make a fun video for their Facebook page. At the end of the day, the challenge raised awareness and a good deal of money but what about the people who suffer with ALS and their families? Before we go in to that aspect, let’s cover some basics…

Before Facebook, ALS was widely known as “Lou Gehrig’s Disease” and is a relatively rare disease with approximately 30,000 diagnosed people in the U.S. Amyotrophic Lateral Sclerosis is a progressive degeneration of the nerve and brain cells that communicate with the brain and facilitate movement. As the disease progresses, patients began to lose muscle control and can eventually become totally paralyzed.

ALS presents a myriad of issues for the patient and their families. Physical suffering, mental anguish and finical ruin are just some of the ways a disease like ALS can affect a patient and their family. As the disease makes its way through the nervous system, the patient begins to lose mobility and suffer excruciating pain. Day to day life becomes an ever growing challenge and the most basic human function, like taking a single step, becomes a monumental under taking. As the patient takes on these grim milestones, their homes need to be altered along the ADA (Americans with Disability Act) guidelines and that can be very expensive.

Everything from bathrooms, stairs, the kitchens, bedrooms and anywhere the patient frequents needs to be made accessible for someone with limited to no mobility. Without help from an outside organization, making a home accessible for someone with disabilities is nearly impossible for most families. Watching a loved one’s physical health literally deteriorate is extraordinarily tolling on the family and can have a dramatic affect on young children. Coupled with finical stresses, the entire family must learn to adapt to significant changes that alter not only the patient’s life but theirs as well.

The Murray family is no stranger to the struggles of living with ALS. When Mike Murray received his diagnosis, he and his wife Dena knew their lives dramatically change. They also knew that they would need help. After meeting others families who were living with ALS, the Murray’s learned the true extent of the finical cost they would incur beyond medical bills. When Michael began to require 24 hour a day oxygen, the family worried about losing during a storms, which frequently occurred in the rural area of Virginia where they live. Then, on an especially stormy night, the family’s worst fear was realized. After a loud crash of thunder, the homes lights went out and a loud alarm rang out from Mike’s monitors. Mike’s oxygen was cut off and he was unable to breath, Dena dashed to call 911 as she prayed he would survive. Because of the distance from their home to the hospital, Mike was taken by helicopter to the emergency room.

As Dena watched her home disappear in the distance from the helicopter window, she began to wonder if Mike would come home, and if he did, would he survive the next power outage? Dena began investigating residential backup generators and quickly learned it was something the family would not be able to afford. She began to look for help and reached out to a dozen different not for profit organization and businesses but kept hitting brick walls. 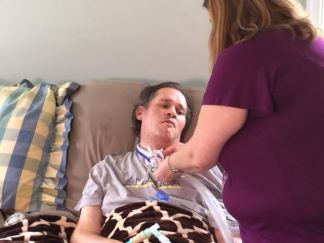 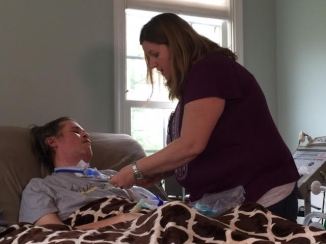 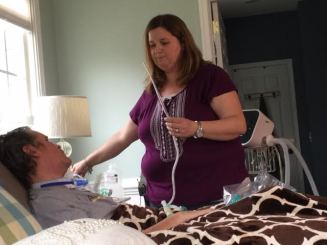