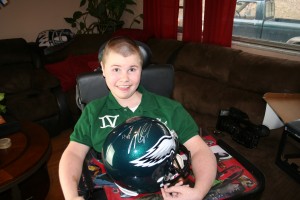 Deep in the heart of Redskins territory, a Philadelphia Eagles fan named Brandon sits in his wheelchair shivering, despite the two Kerosene heaters clunking away in opposite corners of the room. The heaters give off more fumes than warmth and with every labored breath he chokes and coughs. His mother Dawn sits on his bed wringing her hands and agonizing at the sight of her son. She is unable to help him as their oil furnace stopped working at the onset of winter. Brandon suffers from Muscular Dystrophy and the extreme temperatures caused by the lack of a HVAC system wrecked havoc on his condition.

They had payed a few fly by night repairmen who got the system running but only for a few days. One day while watching TV, Dawn saw a program called “Helping Hands; A local home improvement company was helping families with home repairs, families just like hers. Although she did not expect results, she decided to send an email to The Michael & Son Cares Program. She had been let down by so many before; from the not for profit organizations to Social Services. That’s why Dawn was shocked when she later found out she had been approved and would be receiving a brand new heating and cooling system, courtesy of Michael & Son Services.

When Proud Son & Owner of Michael & Son Services Basim Mansour met Brandon, he promised to come back with a surprise. “When I spoke to Brandon I asked what he’s always wanted, he me told an autographed Mike Vick helmet” said Mansour. The next time they would meet, Basim would carry a white box containing that very helmet. “I made a few calls and a couple days later I had the helmet in my hands” Brandon’s mother would never forget the look on his face when he opened the box. “I’d never seen him smile like that” said Dawn “Michael & Son really made all our dreams come true” she continued. 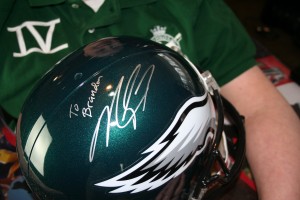 A Call to Families in Need