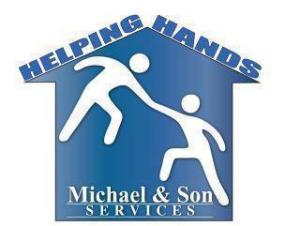 With its contemporary style and touching stories, The TV series Helping Hands has enjoyed a great deal of success over the last year. Each Saturday, viewers all over the D.C. / metro area tune in to watch The Michael & Son Cares Team transform the home of a needy family.  Until now, Helping Hands has only aired in the D.C. markets on NBC4, even though some of our more memorable episodes were filmed in Richmond. Each week we receive dozens of emails, phone calls and social media messages from people asking for Helping Hands to be aired in Richmond. In response to the overwhelming demand, Helping Hands will begin to air in Richmond this Sunday (4/7/13) at 12pm!

“Helping Hands has had a tremendous impact on viewers and businesses in the D.C. area” said Basim Mansour, Proud Son & Owner of Michael & Son Services, inc. “After the airing of every show, we receive a large number of calls and emails from business and individuals who want to volunteer their time or make donations. This is precisely the intent of the Cares Program; to inspire others to help” continued Mansour.

The Michael & Son Cares Program has helped dozens of families in D.C., M.D., V.A. and N.C. with essential home repairs they cannot afford. Watch the work and see the touching stories behind the projects by tuning into Helping Hands! Catch all the new episodes of Helping Hands by following the schedule below. You can catch up on episodes you missed by subscribing to our YouTube page. Also, like us on Facebook, follow us on Twitter and subscribe to the Helping Hands Blog for more information abut the show.

Serving Those Who Serve